Hawk Mountain Sanctuary was my backup itinary, and is about one hour driving from Middle Creek. This is a very important place that migrating hawks head to the South in the late Fall, and back to the North in the Spring. It the past, it was a notorious where people shot down the passing hawks and caused tremendous decreasing of the numbers of hawks. Untill 1934, Rosalie Barrow Edge, a New Yorker, leased the mountain, and hired people to prevent to hunters coming to kill hawks. The number of hawks saw gradual increase since then. Presently, Hawk Mountain Sanctuary is administrated by a private orgnization. The visitors can enter the mountain outlooks by purchasing an entrance ticket, which was $9 per person when our family visited.

We came here for scouting purpose so to get a first hand experience for the visisting in the right time. This was not the right time for hawk watching. We told our plan to the friends from Boston, who were also willing to join us since there was not much to do in Middle Creek during date time. We headed to the Hawk Mountain since we lost them in the Middle Creek. On their own way to Hawk Mountain, they found another site of snow geese by accident. This was a great reward for our trip.

The other site of snow geese our friends discovered was in a private farm, in the south of Interstate 78, close to Exit 19. It is in the west of the junction between Telbert Road and Town Road. The small pond in the farm can be located from the Google Map. More trhan 10,000 snow geese covered the surface of the pond. On the bank of the pond, snow geese were also everywhere around the horses, Cows and sheeps. It seemed that the horses disliked snow geese as we saw the horses frequently run toward snow geese to chase them away. In constract to Middle Creek, the snow geese were in close distance with us, only separated with a wired fense. Whiel we were there, flocks of snow geese were coming from other locations. Suddenly, there was a powerful hunshot and all of the birds bursted into the sky. The pond and its surround became empty altogether momentarily. The gun was shot by the farm's owner toward the syk not mean to kill a biird, but to please his relative who was also the visitor to see the birds in his farm. Realized no harm, the frightened gees gradually flew back and landed in the pond or its bank, and finally filled the whole pond surface again. Severals days leter, other friends visited the same place and saw no trace of the geese there. 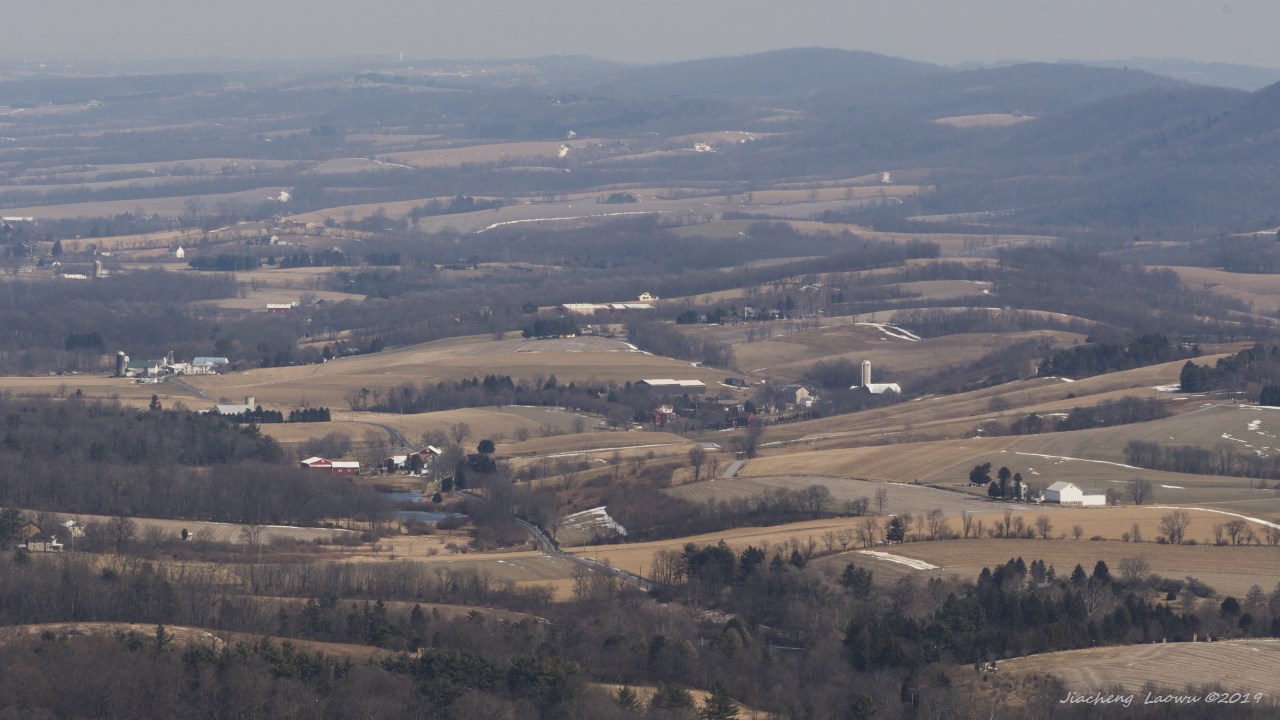 P1 Overviewing the villages from the Hawk Mountain 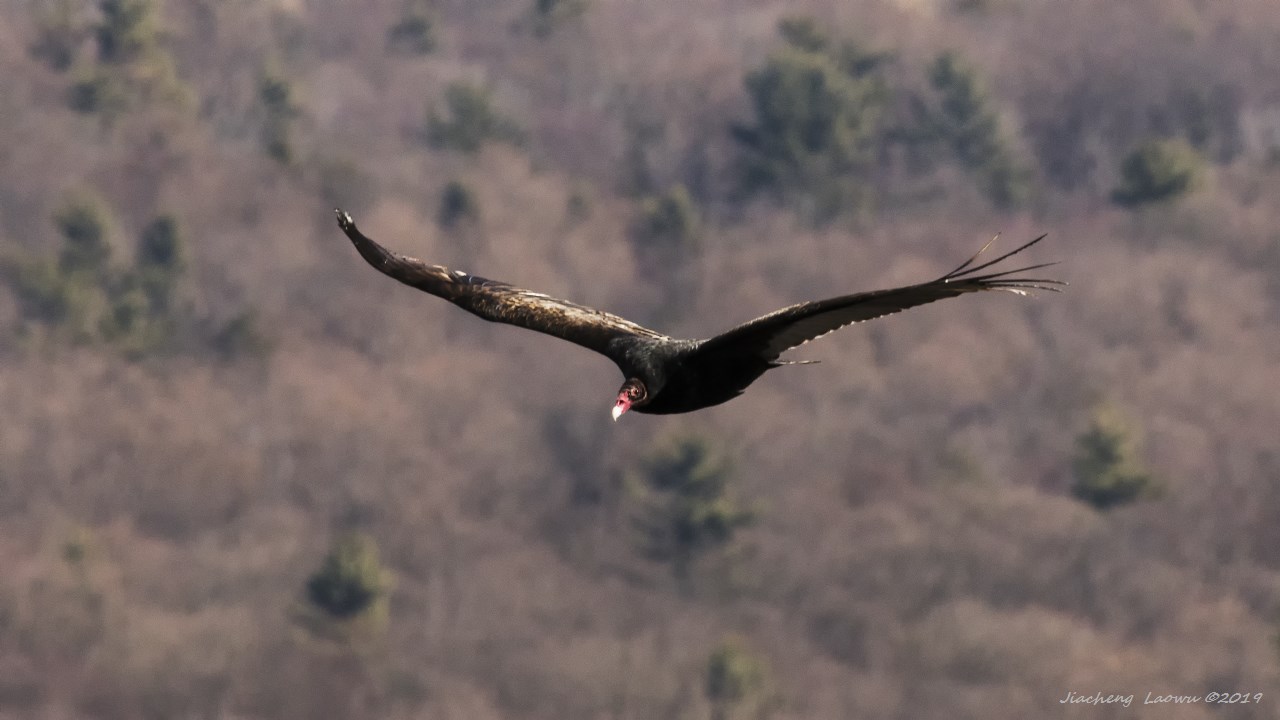 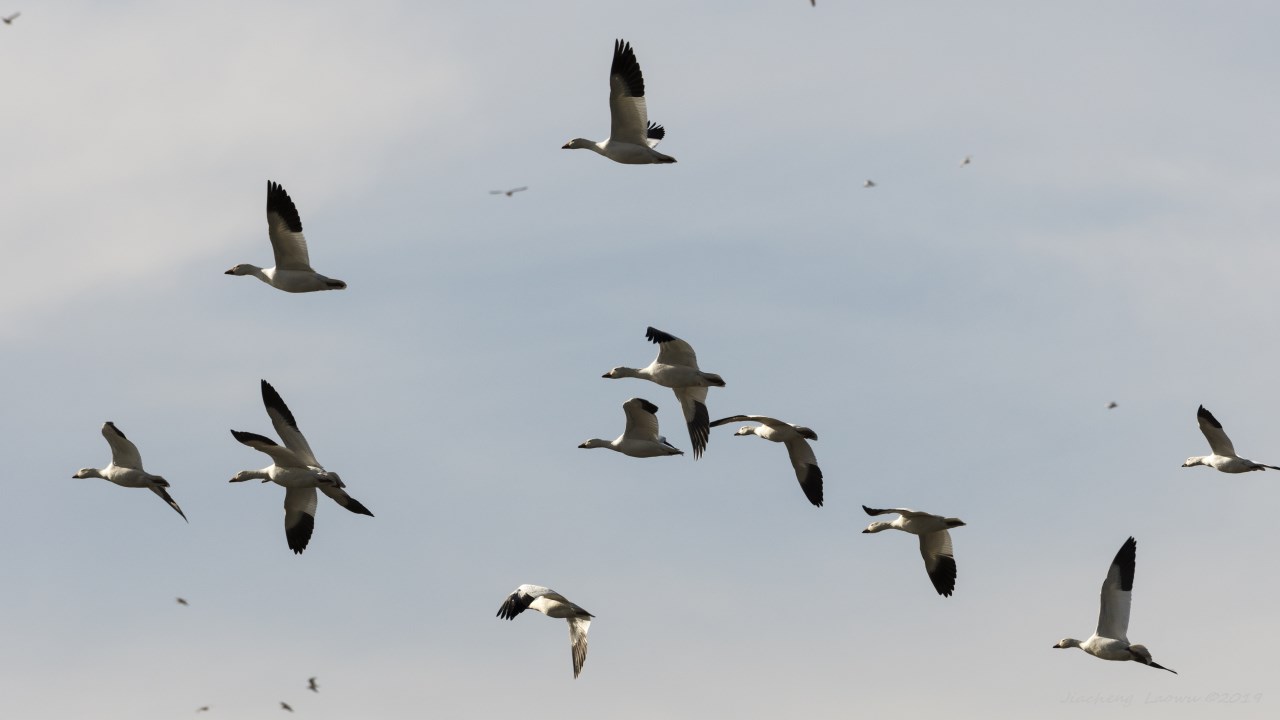 P3 Snow Geese over the Farm 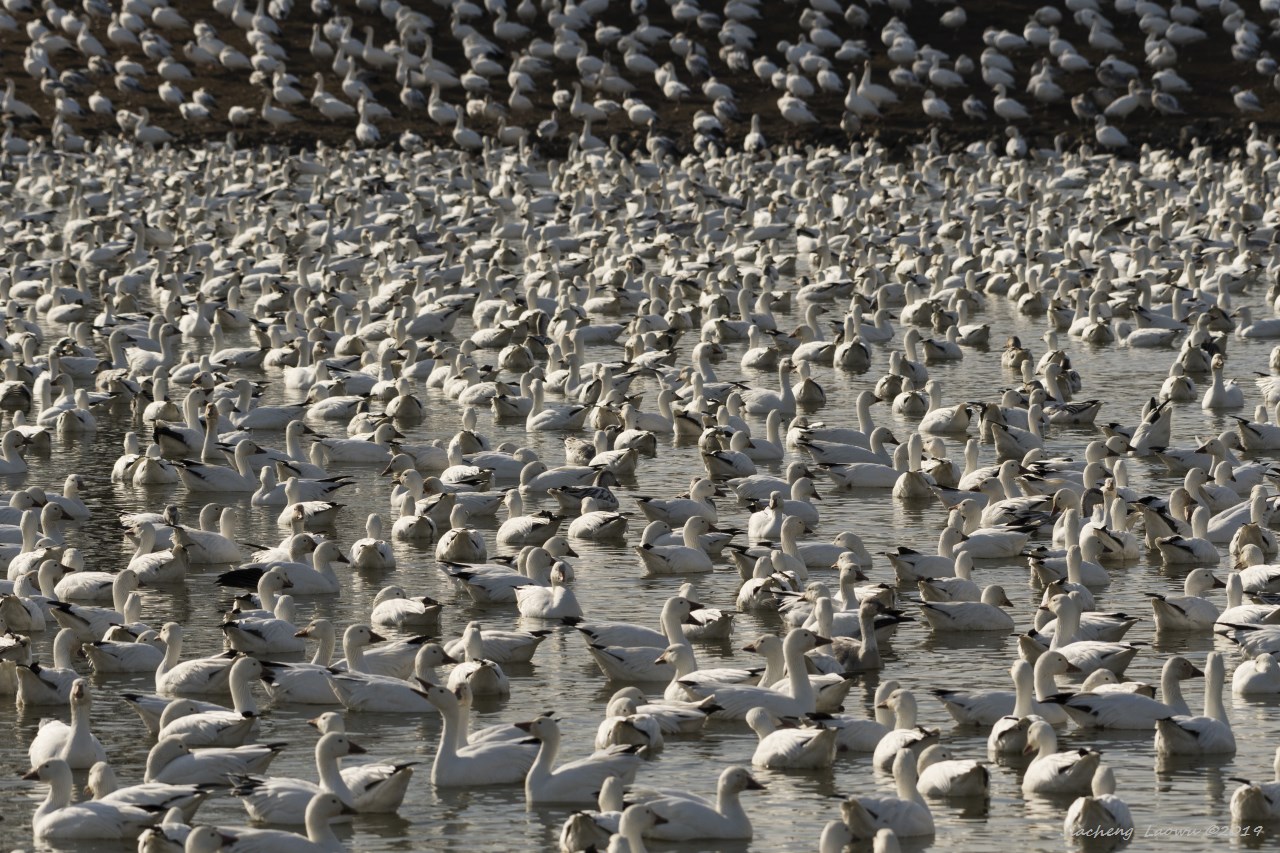 P4 High density of the Snow Geese in the Pond 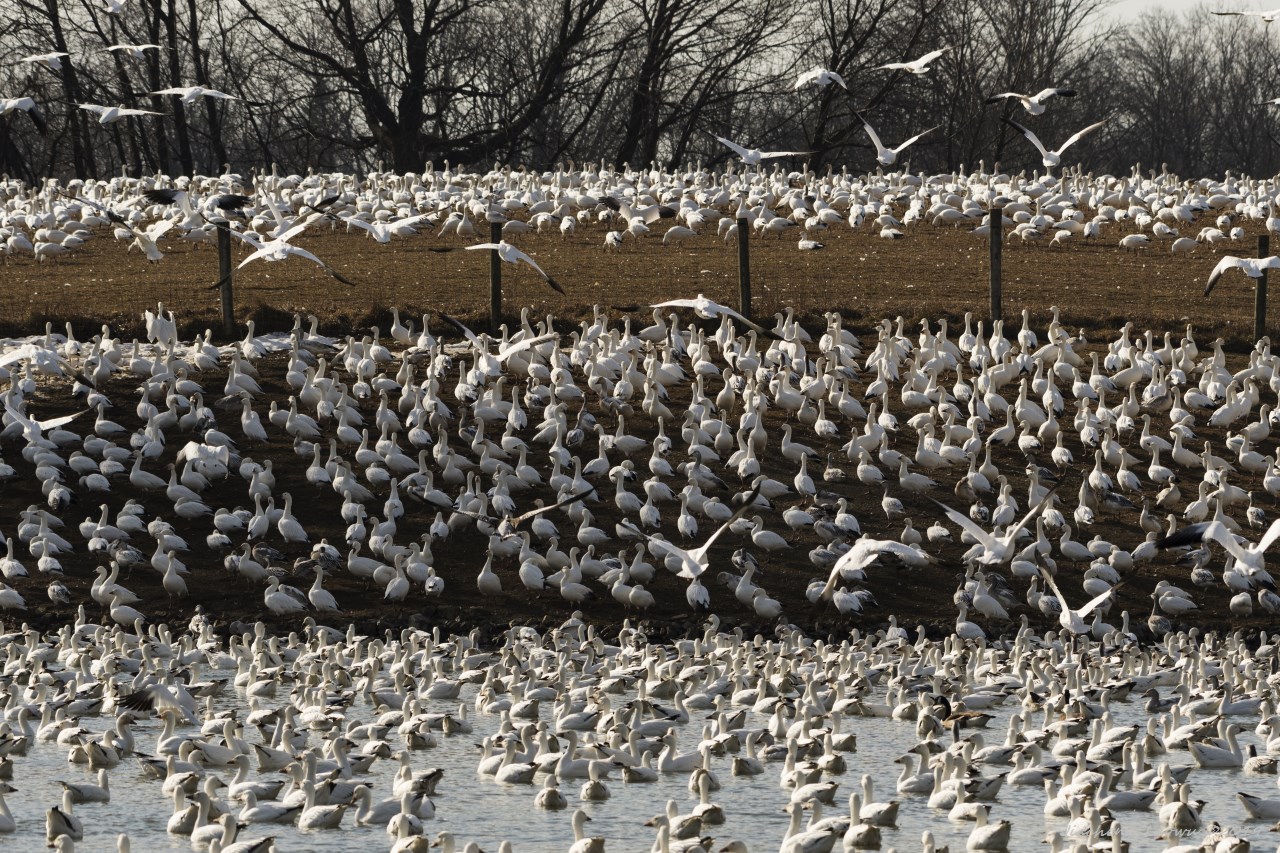 P5 Snow Geese everywhere in the Pond and Land 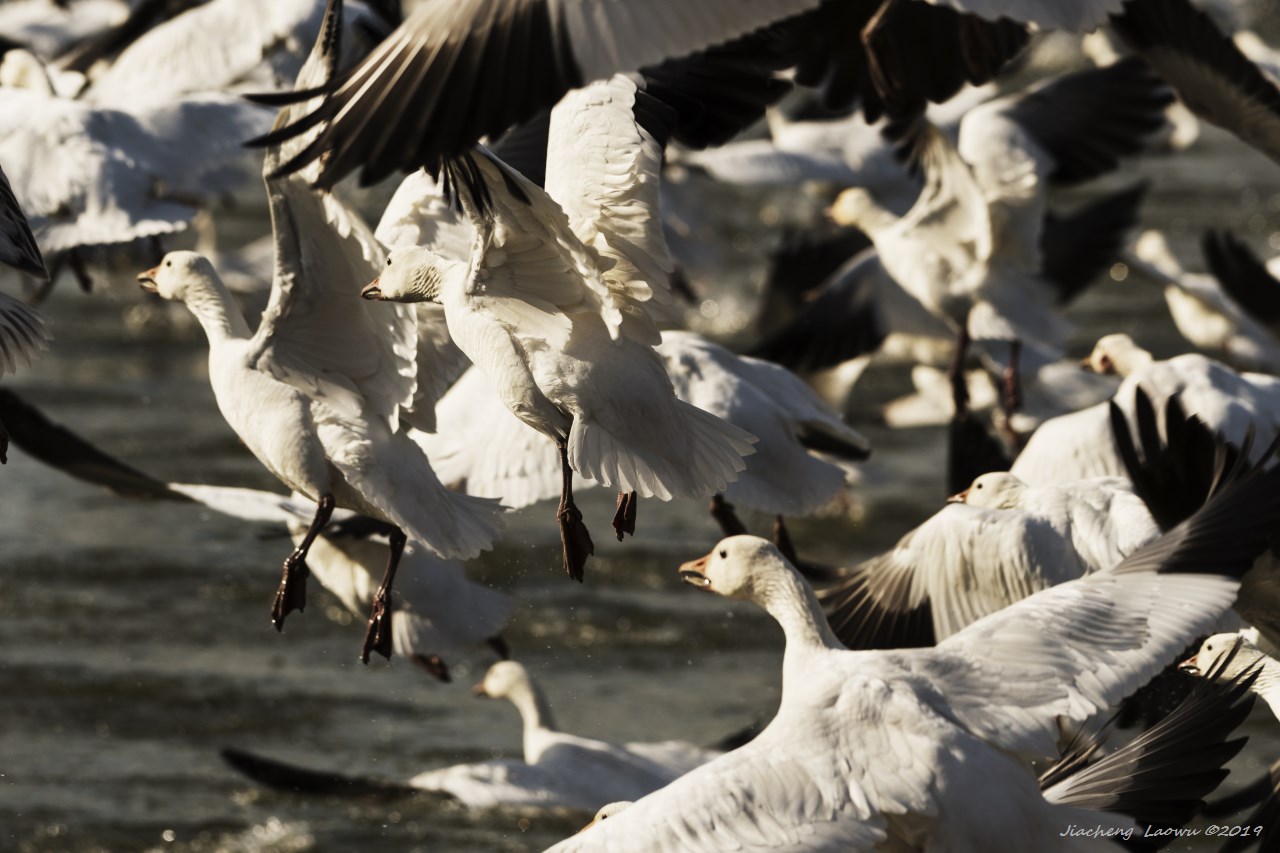 P6 Taking off from the Pond 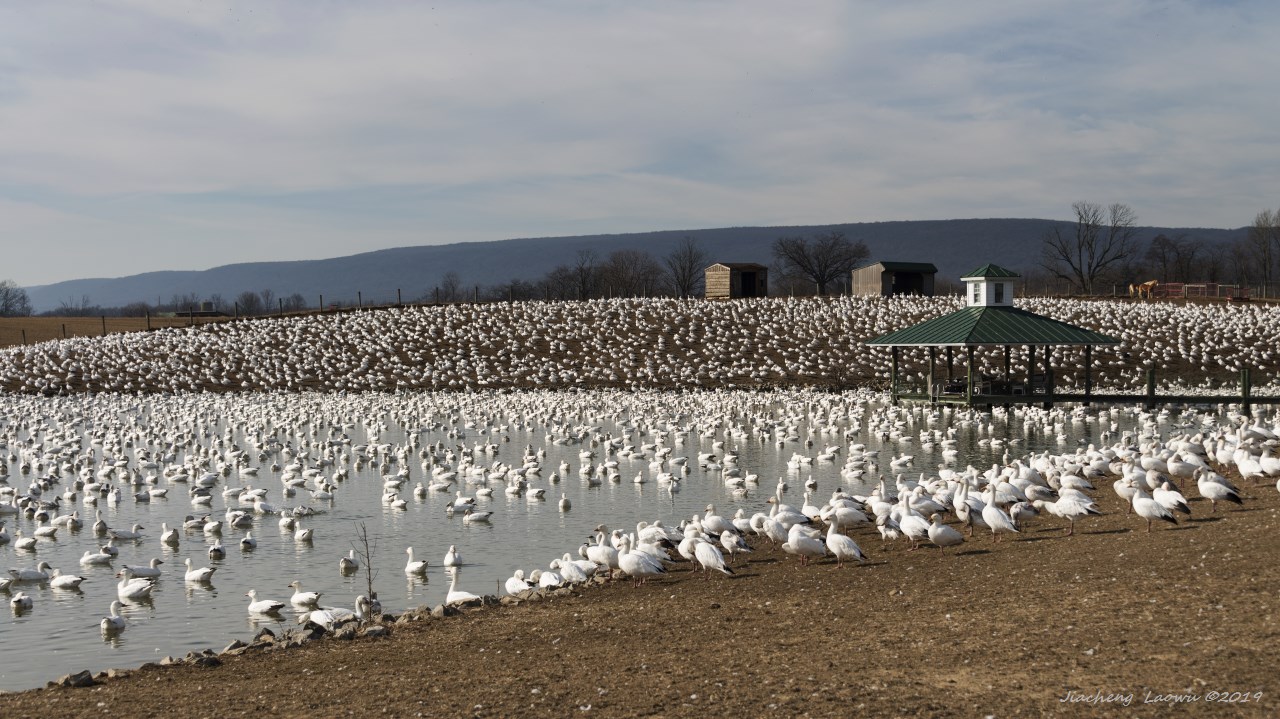 P7 The Farm and its Pond 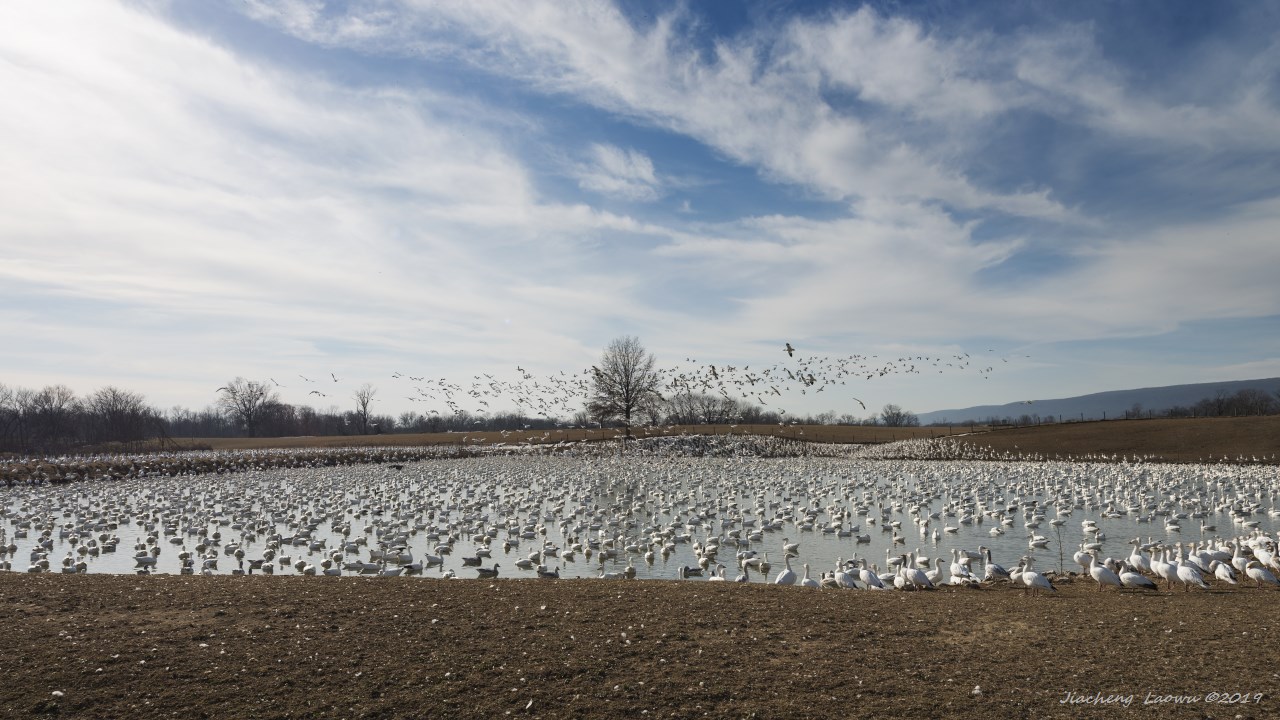 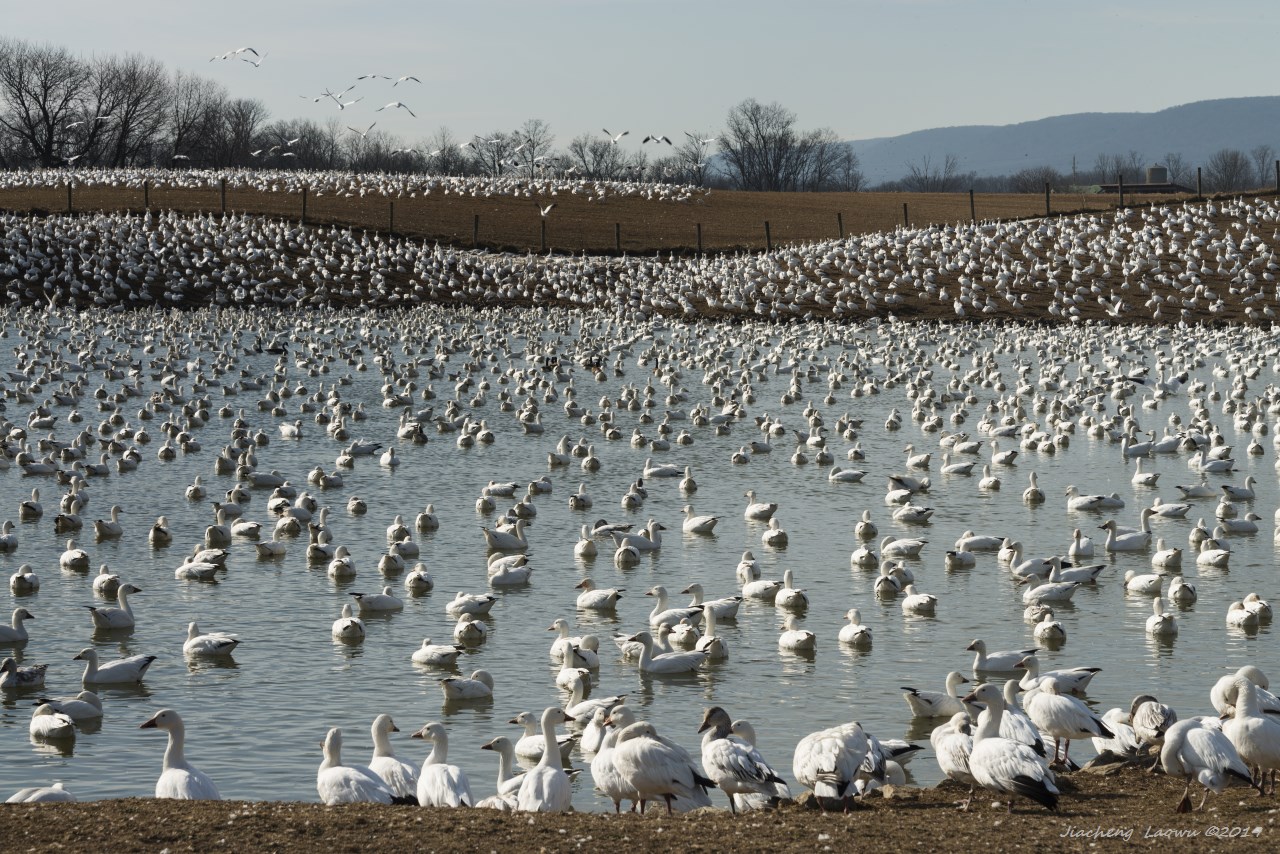 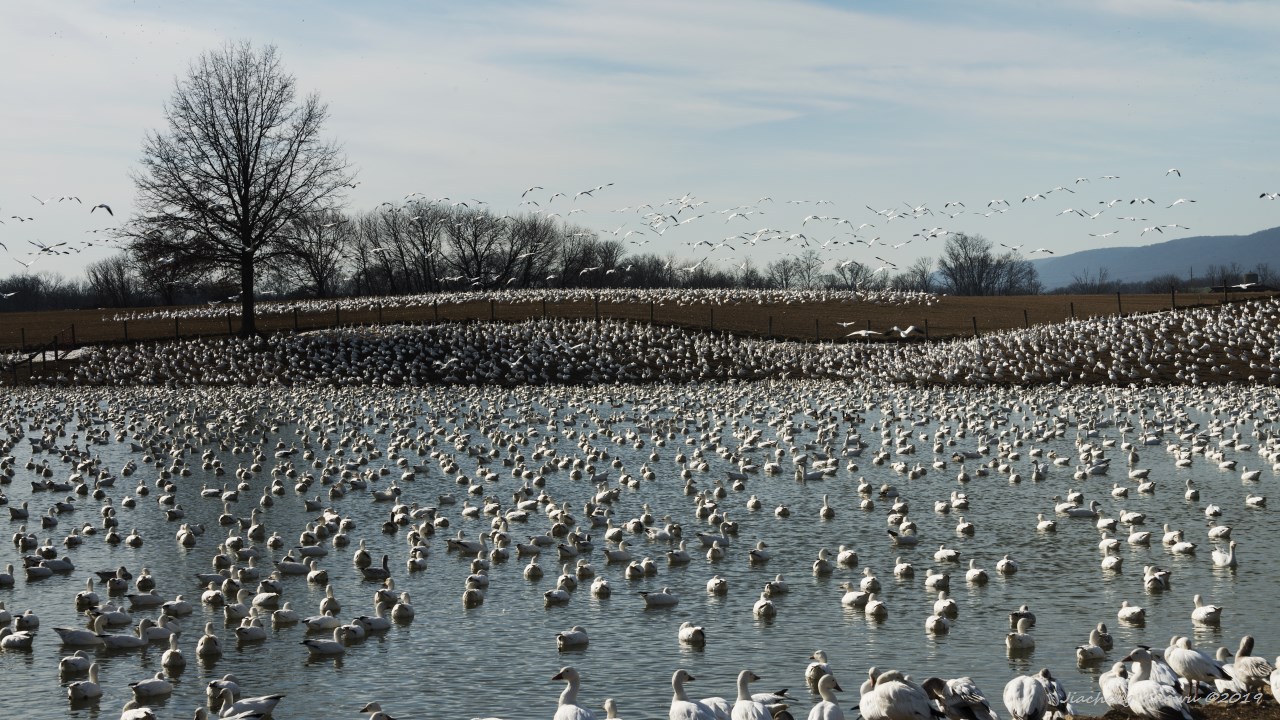 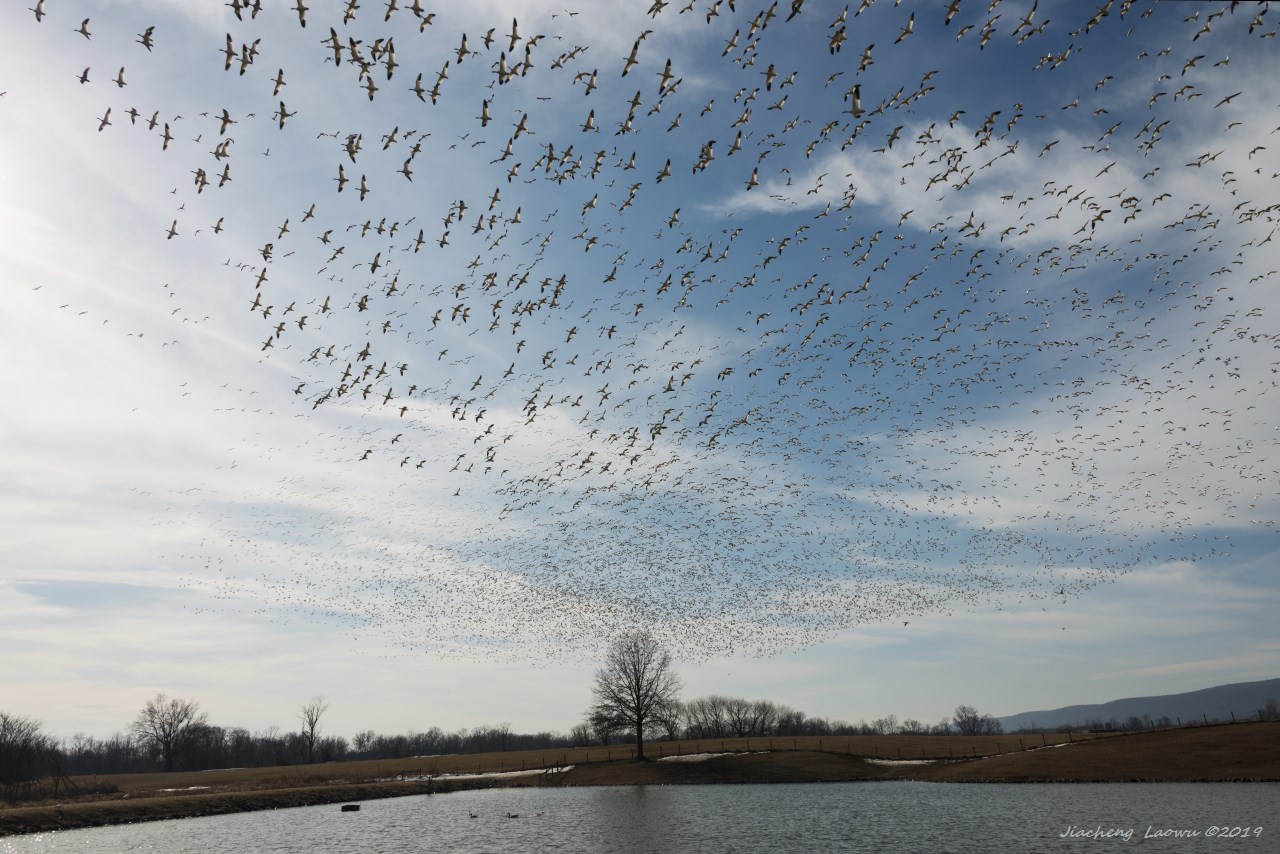 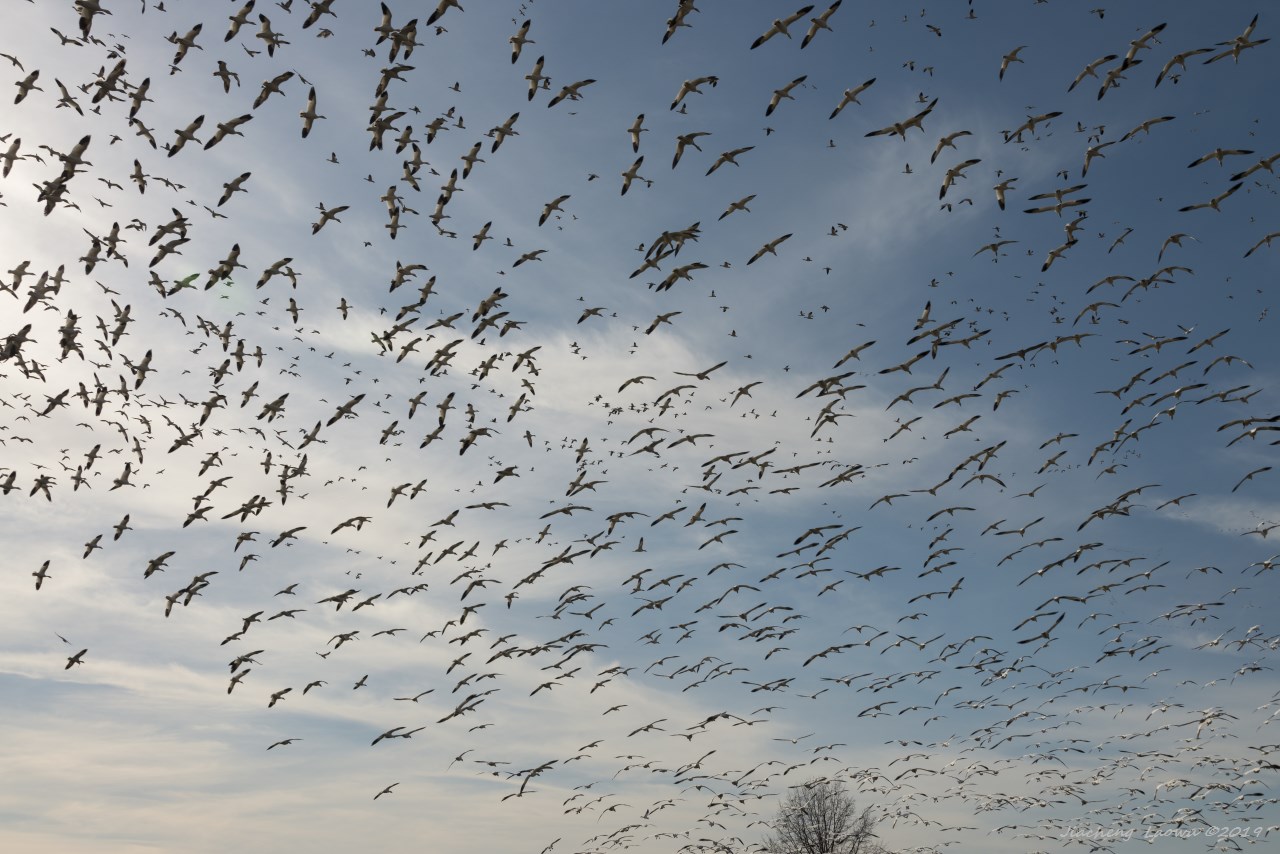 P12 The sky was filled with Snow Geese 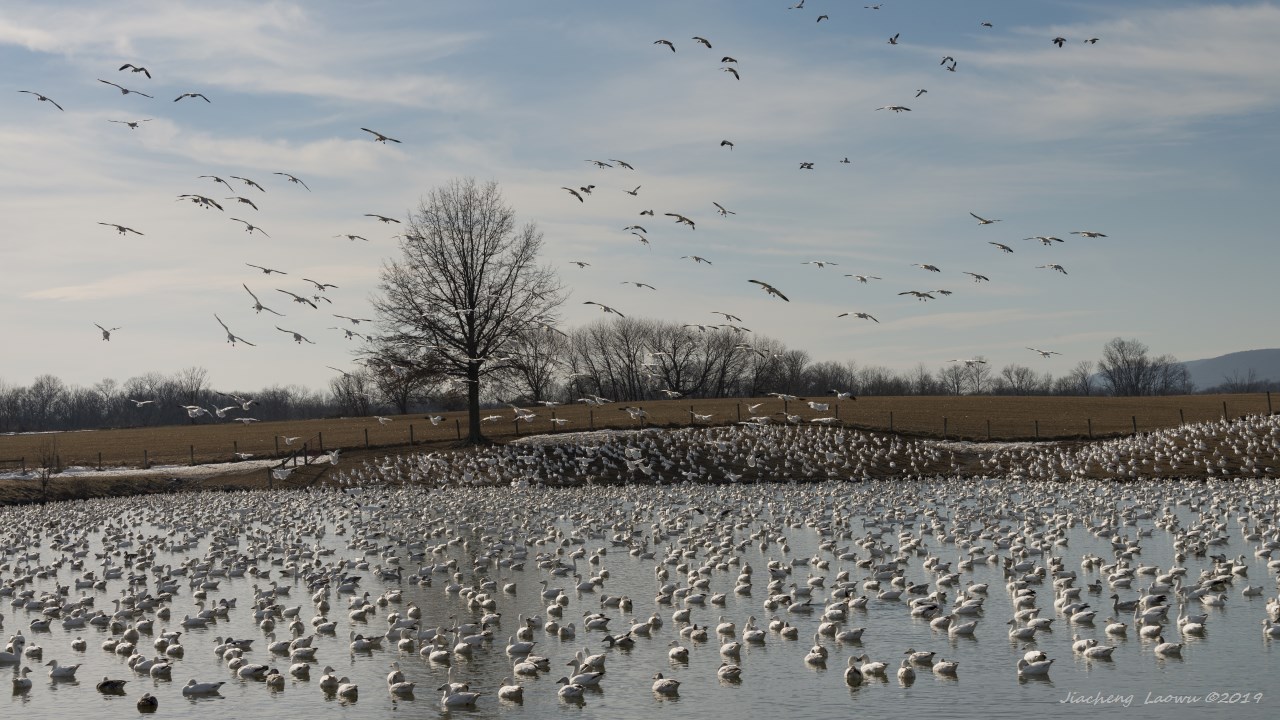