A Big Day with Three Owls

A Big Day with Three Owls

This is the most rewarding day of my Owl action. Ideally, I would go out on the Saturday and stay at home on the Sunday based on the weather forecast days before, which said the Saturday would be sunny with temperature around freezing point while the Sunday would be cloudy, windy and snowing. Unfortunately, I have to support my son's activity on that day. When I came back home that evening, I logged in my compueter and got the news of a snowy owl in the Plum Island for the whole day. I knew that I missed the opportunity that day. When I checked the alert early Sunday morning, there was a report of a snowy owl in New Hampshire coast. I headed out the home immediately with a hope of seeing an owl.

I was puzzled when I arrived at the New Hampshire coastal area, the land on both sides of the road was covered with thick snow, yet the traffic is rather busy even on the weekend. The residential houses are on the right side of the road, while the beach is on the left, straight ahead of the road is a bridge. I pulled my car on the curb side, moved forward slowly with an attempt to find a place nearby to park my car while observing the surrounding. After I found a man walking on the thick snow with a tripod on his shoulder, I decided to find a safe place to park my car as soon as possible. So I turned my car around, and found a small park on the road side very soon. The snow on the roadside was very deep, and it was very wind and frozen. I walked strenuously in the snow with the camera and tripod. After a while, I saw a gray spot over the snow covered sand dune some distance away. With the help of my telephoto lens, I was sure it was a snowy owl. I was surpised by eyes which has been trained be so quick and sharp locating a snowy owl. I stopped walking and take several quick shot of the owl. The owl took off before I set my feet to move myself closer. The owl did not leave, rather landed farther away from me. I walked forward, then met the man I previously saw while I was driving on the road. He was closer to the snowy owl than me, and has a bigger lens. I guessed that he might taken a lot of good photo alrealdy. After greeting each other, we agreed to moving closer in a very slow pace. We moved forward about 5m, but the result was still not good. Then we moved a few meters further, I merely took a few photos before the owl suddenly took off and disappeared behind sanmd dunes. We searched the other side of the sand dunes and also the areas nearby, and did not found any trace. 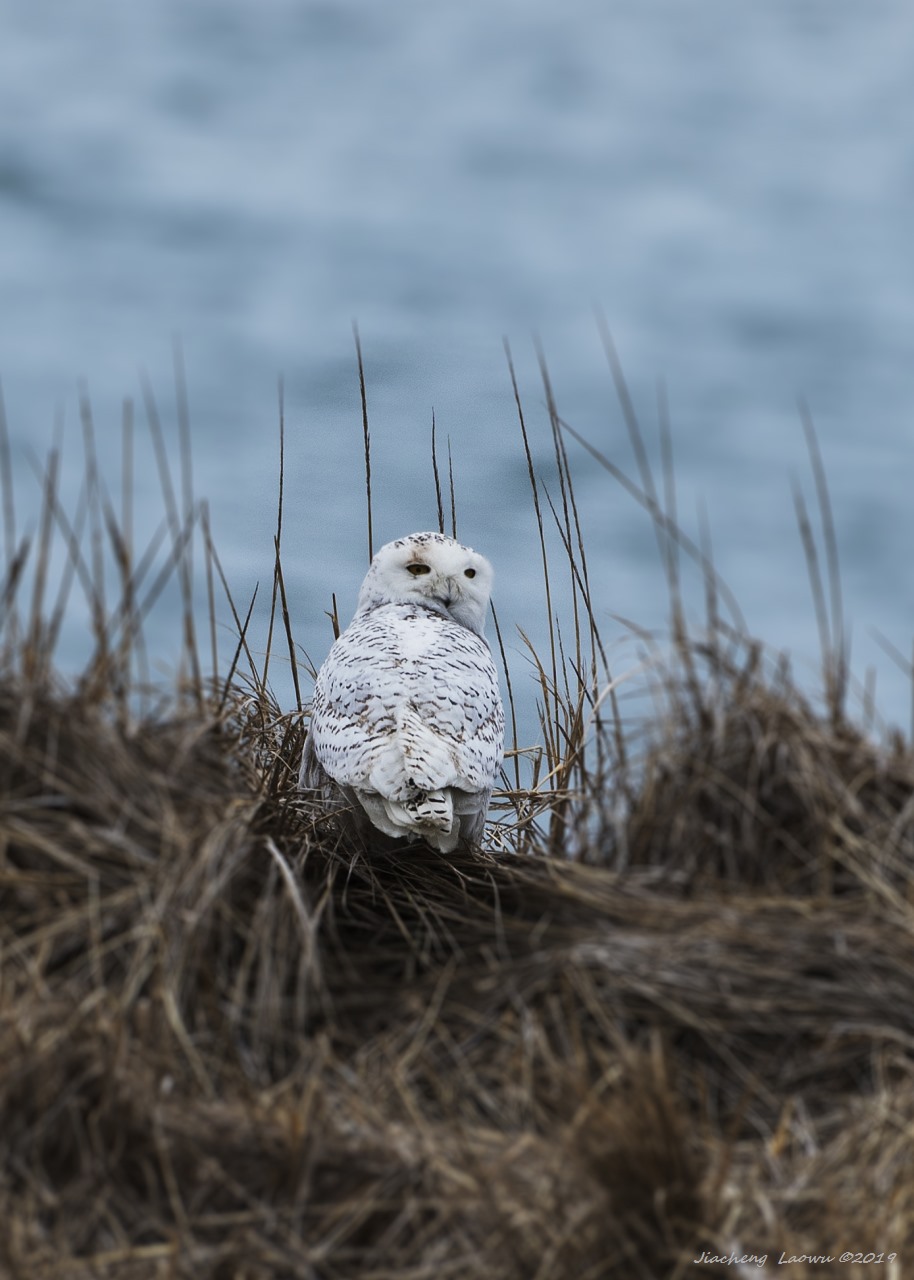 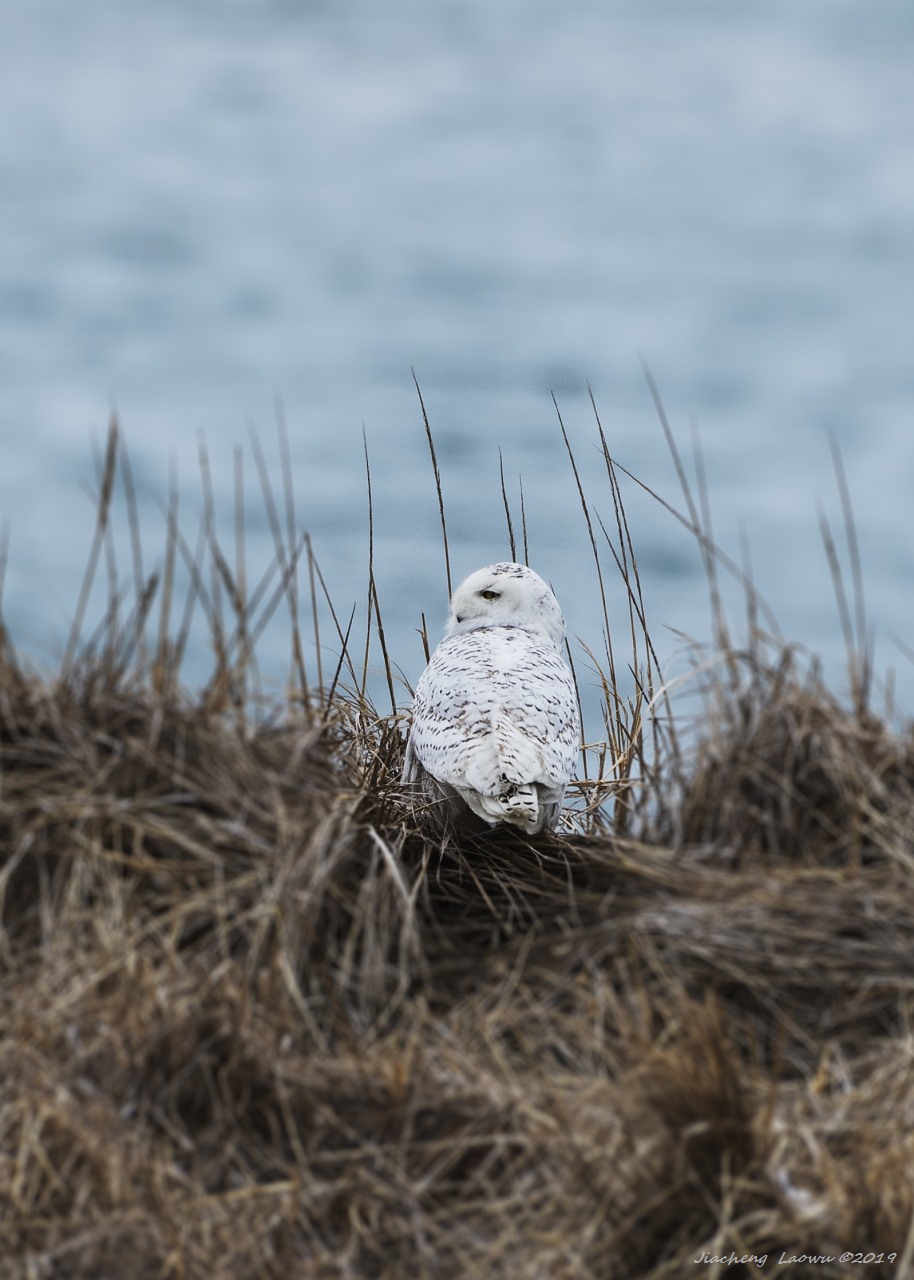 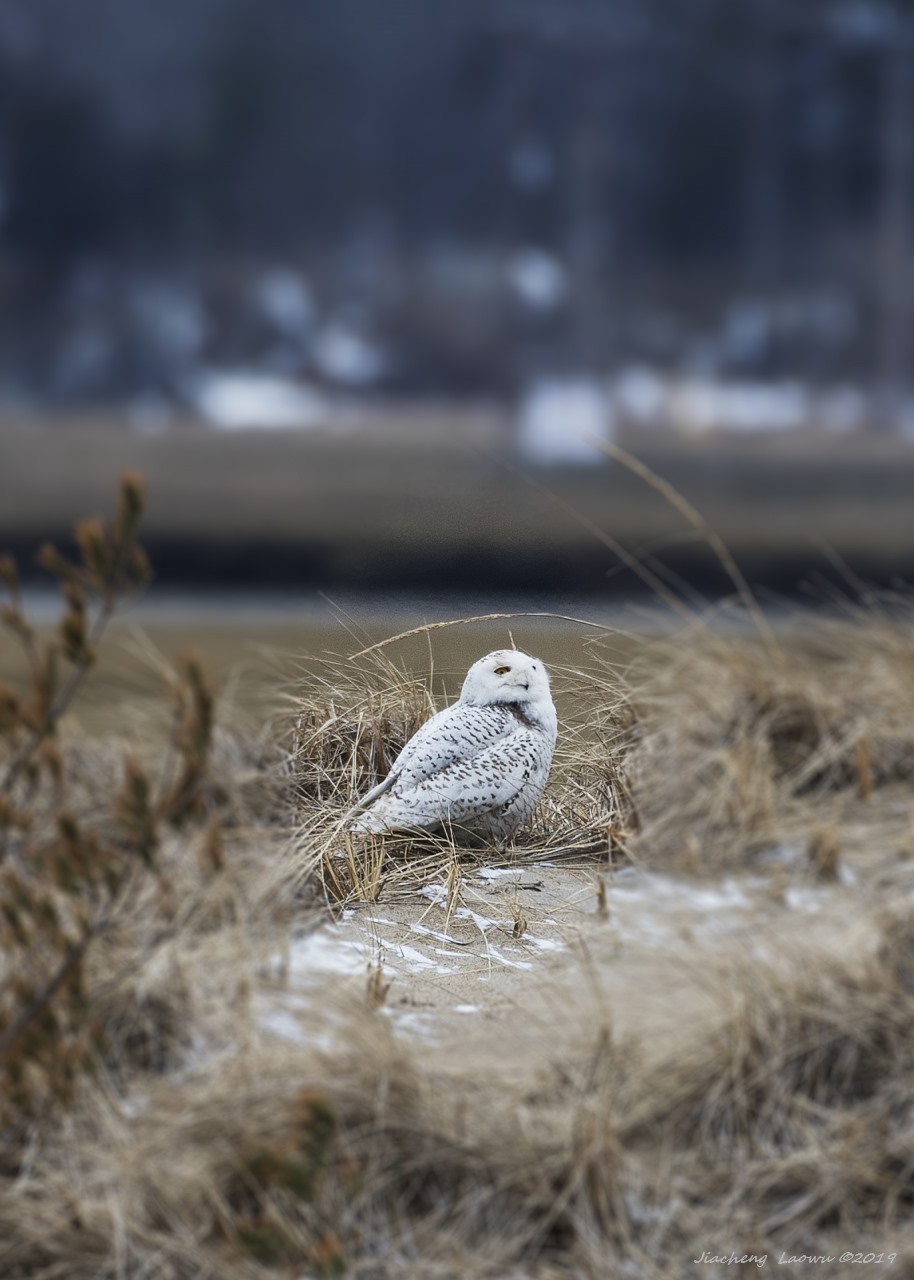 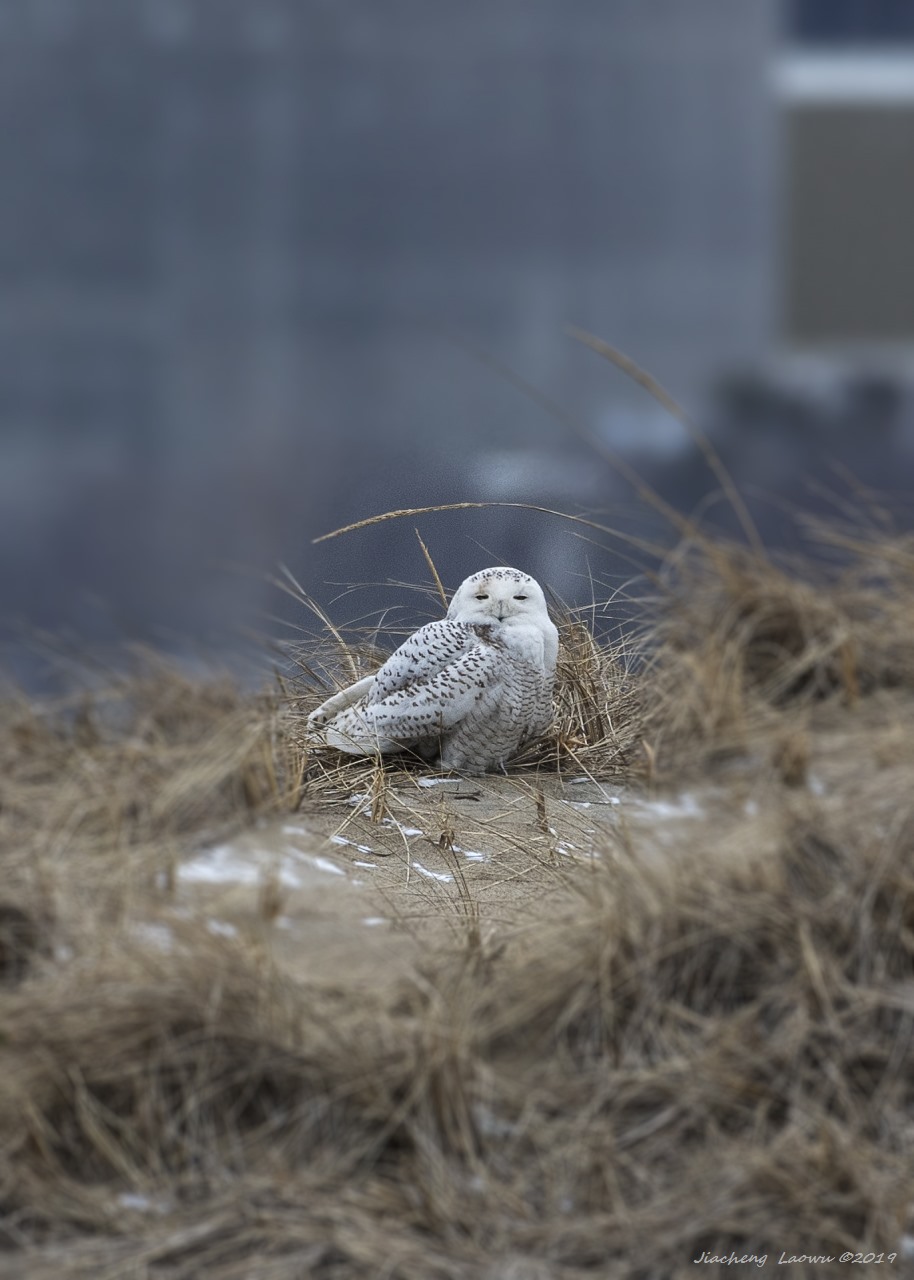 My first time seeing a barred owl was in Plum Island. The owl was perched among a thick trees and branches, none of the photos took were ideal. I did not see the barred owl in my last visiting of Plum Island following my encountering of a snow owl in Salisbury state conservation. However, some people told me that they did see it in that morning and saw the owl flying away since some photographers interrupted it by trying to move closer. Then there was no sight of the barred owl in Plum Island for quite a lomg time. Today, I headed south to the Plum Island after I lost the sight of a snowy owl in New Hampshire coast. Since this was my toutine visit, I did not expect to find something unusual in this very cold day. As soon as I walked out of the car in Park lot 4, some ones told me a barred owl in the usual forrest area. I knew where it would be since I walked in that trail many times before, then speeded up toward the destination. When I arrived, several photographers were already there and took good positions. This barred owl was probably the same one I saw last time. Last time, the owl was on the marsh side of the board walk, among thick trees, some distance from the board walk, the location was very challenge for photographers; the owl also closed eyes most of the times. The chance in this time was much better, for the owl perched in a rather open location, less that 10 yards from the board walk. After a short while there, someone left and yield an easy position to me. I stayed there and enjoy watching and photoing the owl for about two hours before I gave the position to other person. During that time, the owl was active, moved the head many times searching for prey. The owl seems ignored the people in front of, and accustomed to the voices of people's talking and camera shutters. 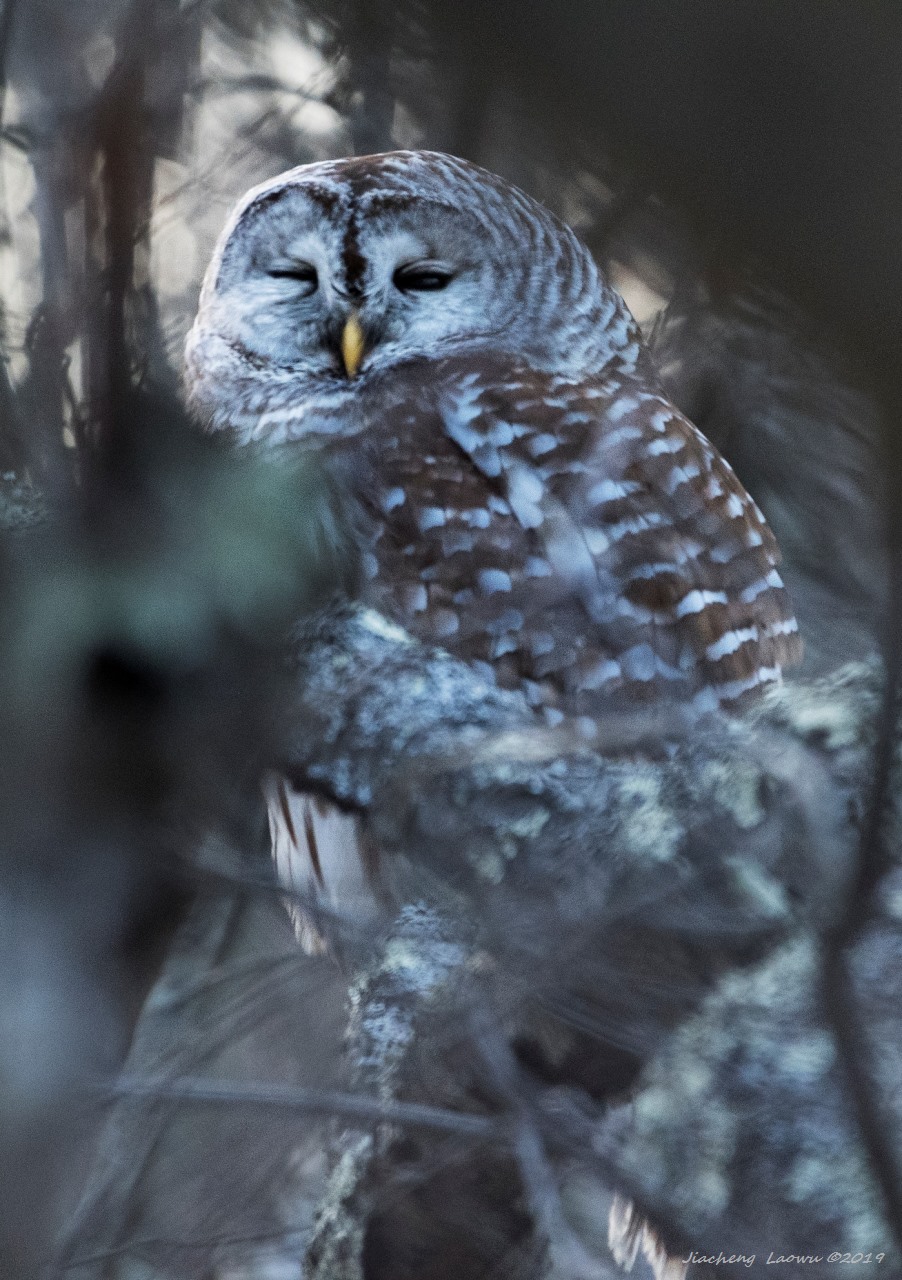 P5 The first barred owl photo I took , better than nothing. 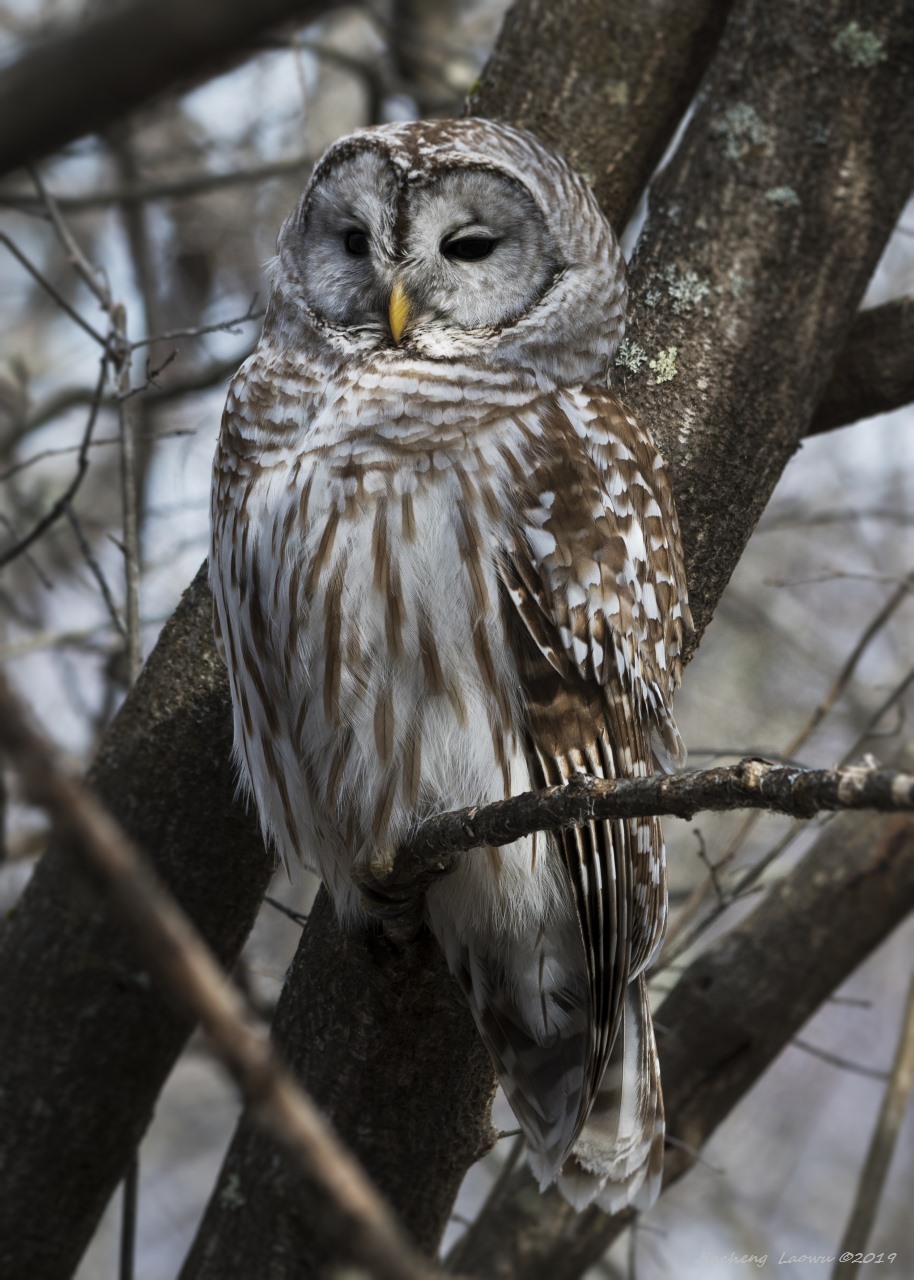 P6 This and the rest photos were taken this time 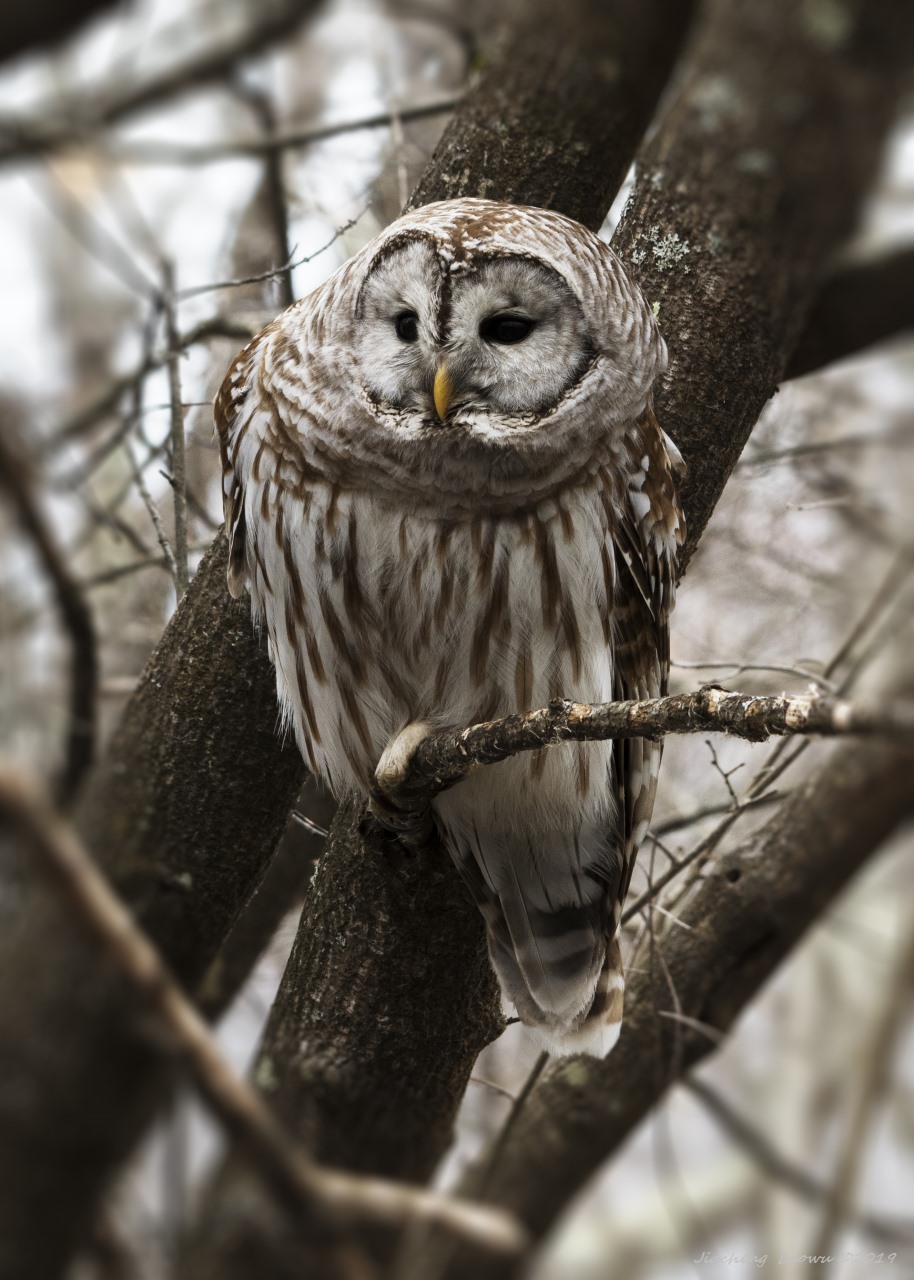 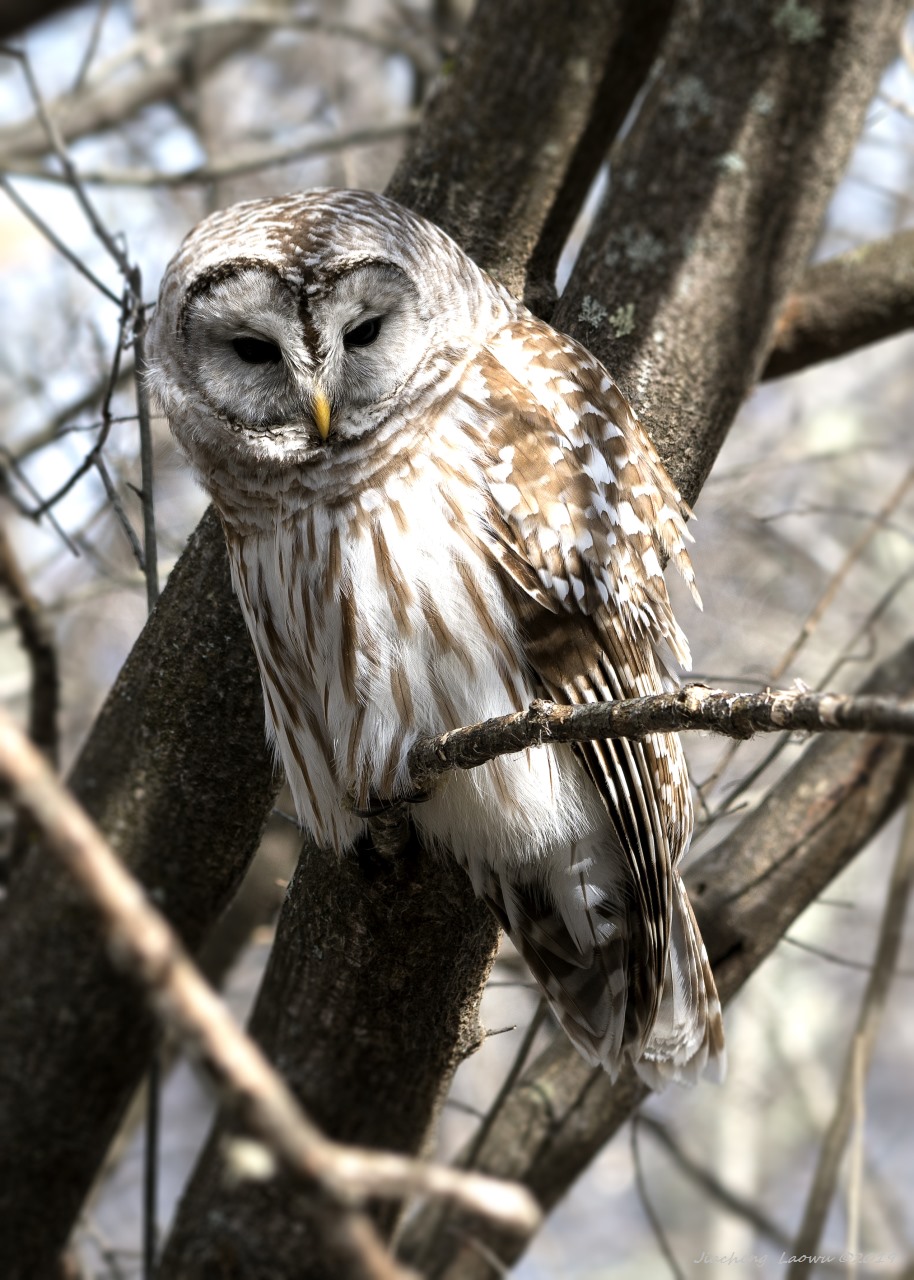 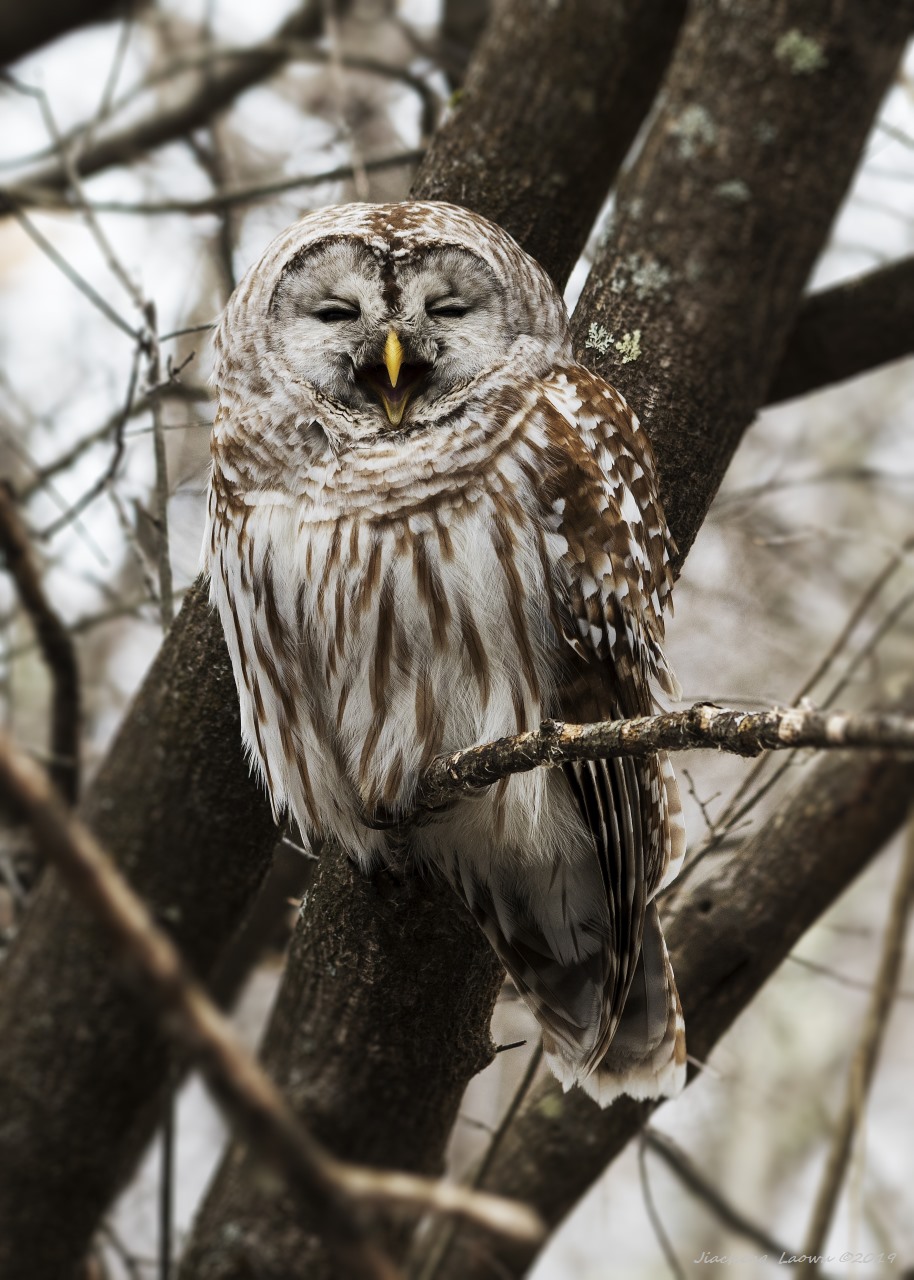 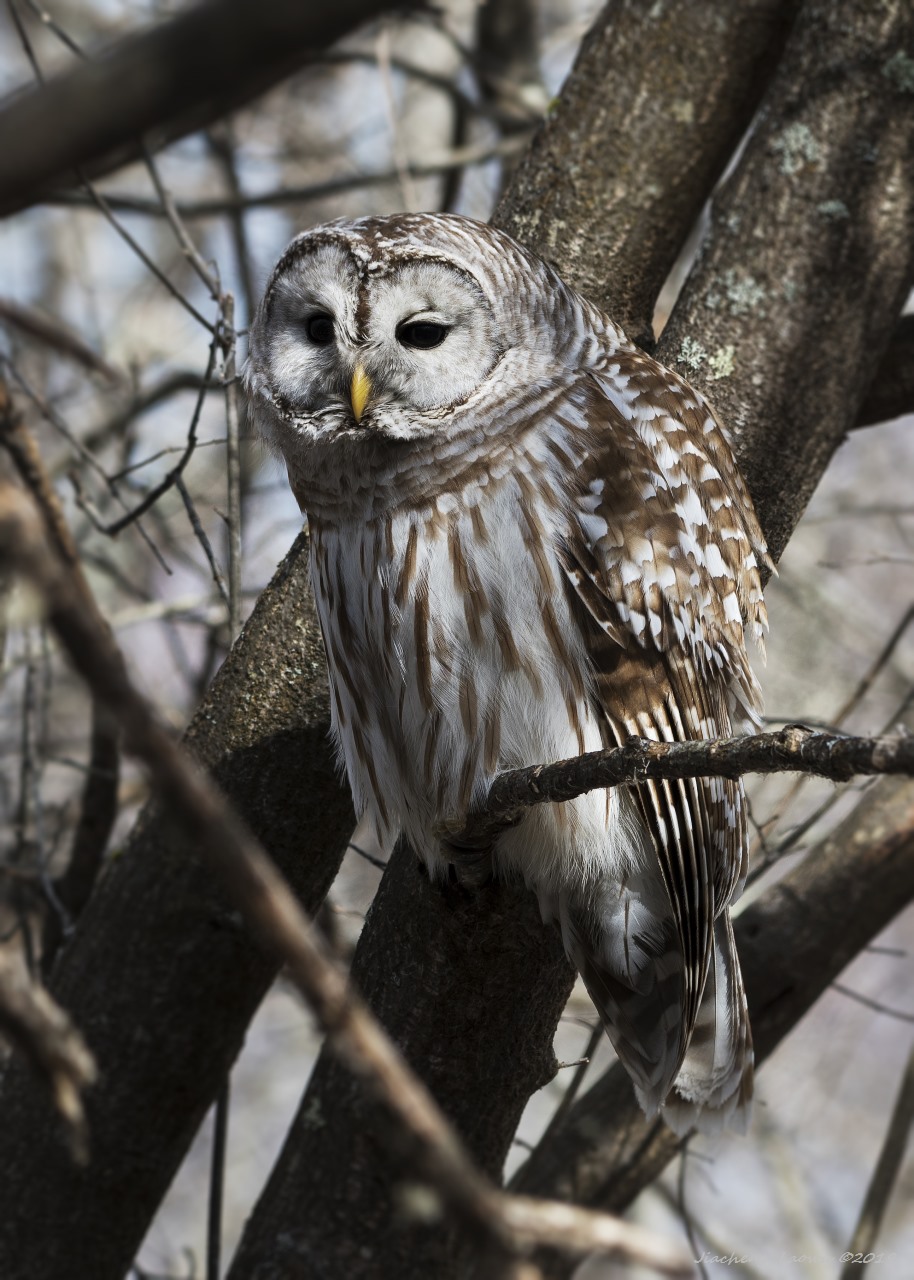 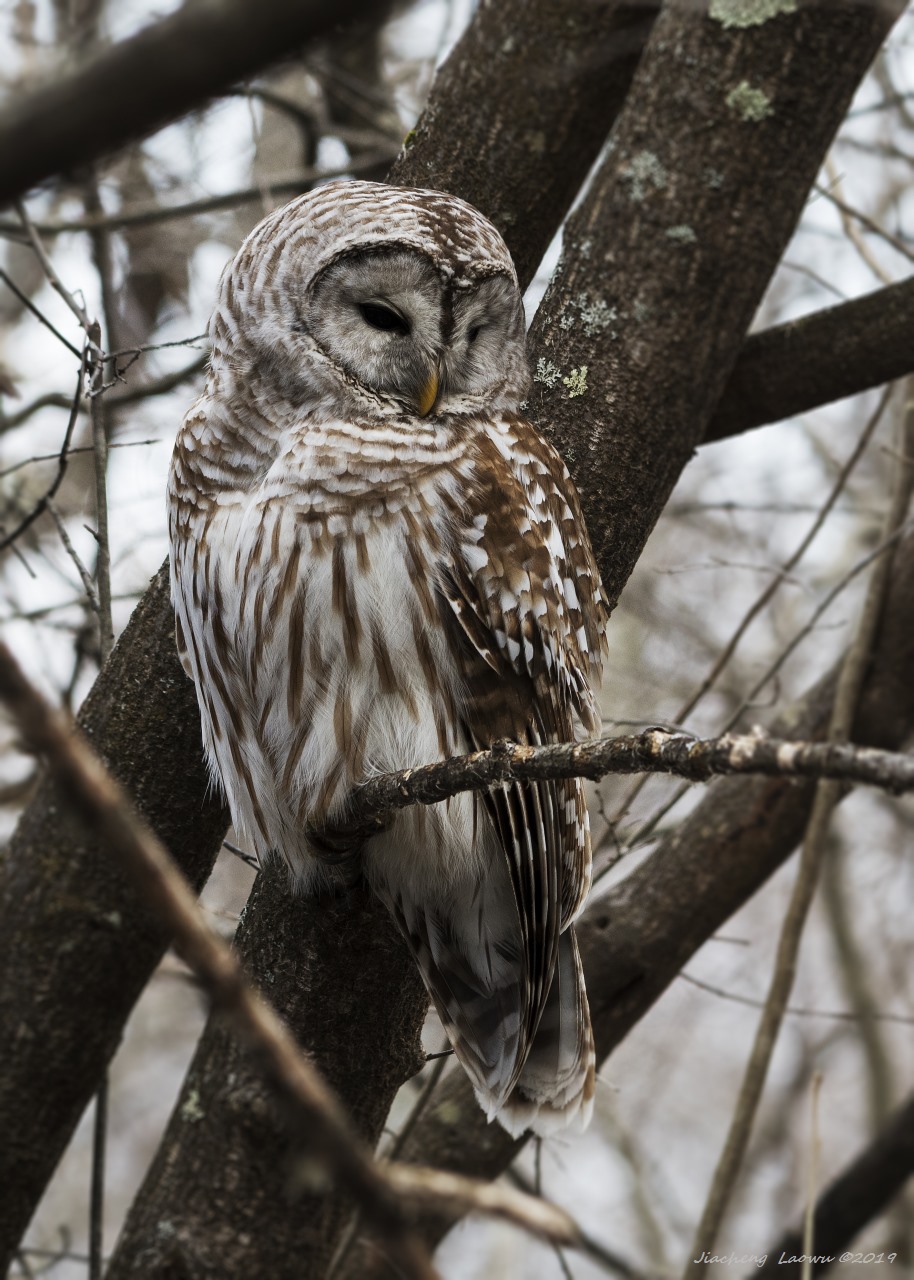 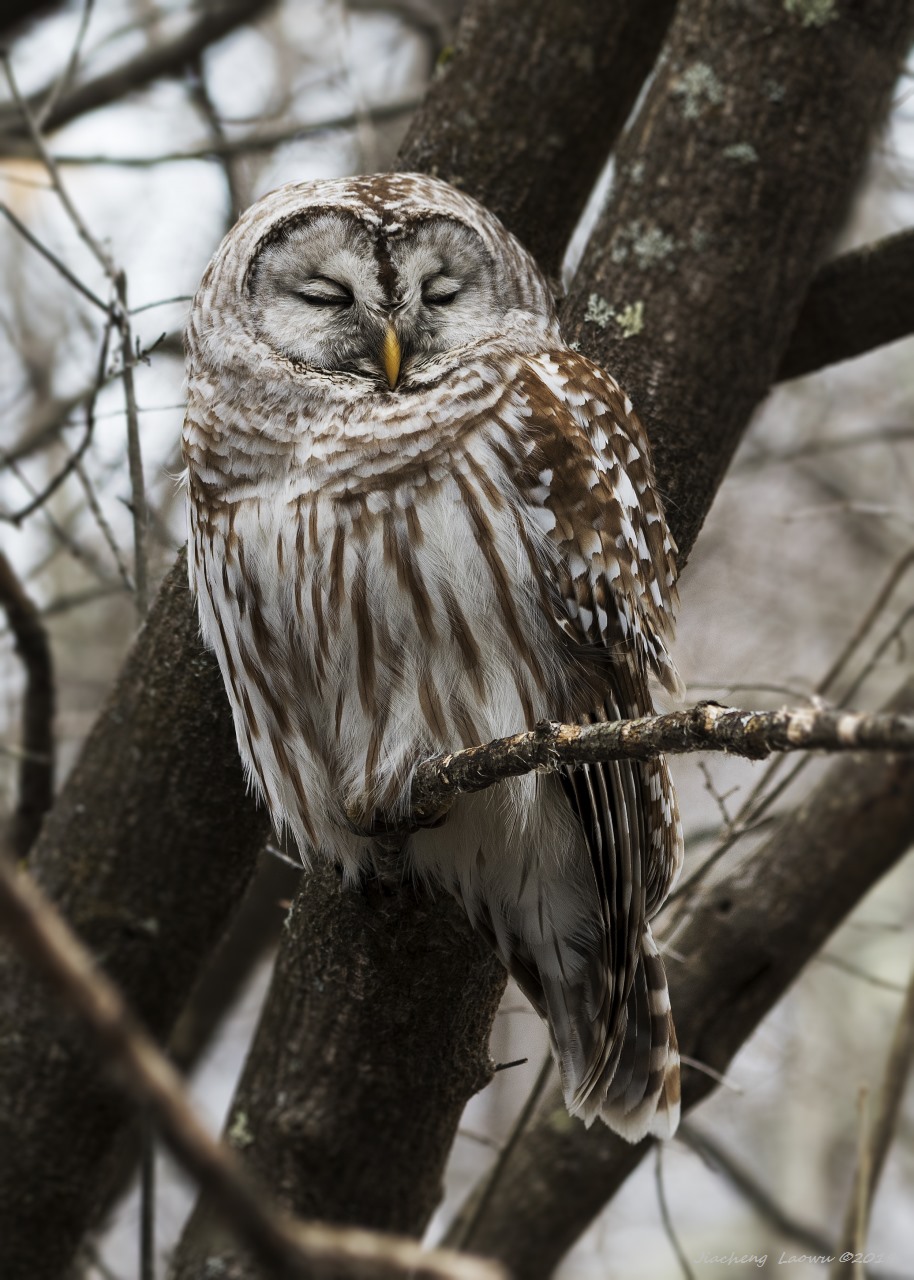 This eastern screech owl has taken the hollow of a tree in the town of Newburyport as home. Newburyport is on my way back and forth to Plum island. I stopped at the tree on the way to Plum Island around 12:50, and I did not see the owl. I though it might gone for good. I arrived at the treel on my way back from the Plum Island and found the owl standing at the entrance of the hollow. There were several photographers and spectators under the tree. In my recent visits during the weekends, I always saw an old man there with a long focal lens on the top of a tripod, attached to it was a photobook with the wild lifes he photoed in recent years. We became friends after meeting each other so many times. His name is Andy, living in a town about 100 miles away. He visits this owl every weekend. Accord to him, the owl settled in the tree around the ThanksGiven days. It has disapeared for several days and returned only recently. According to the nearby people, the tree was origonally planned to be cut down by the town. However, the tree is preserved after the discover of the owl. 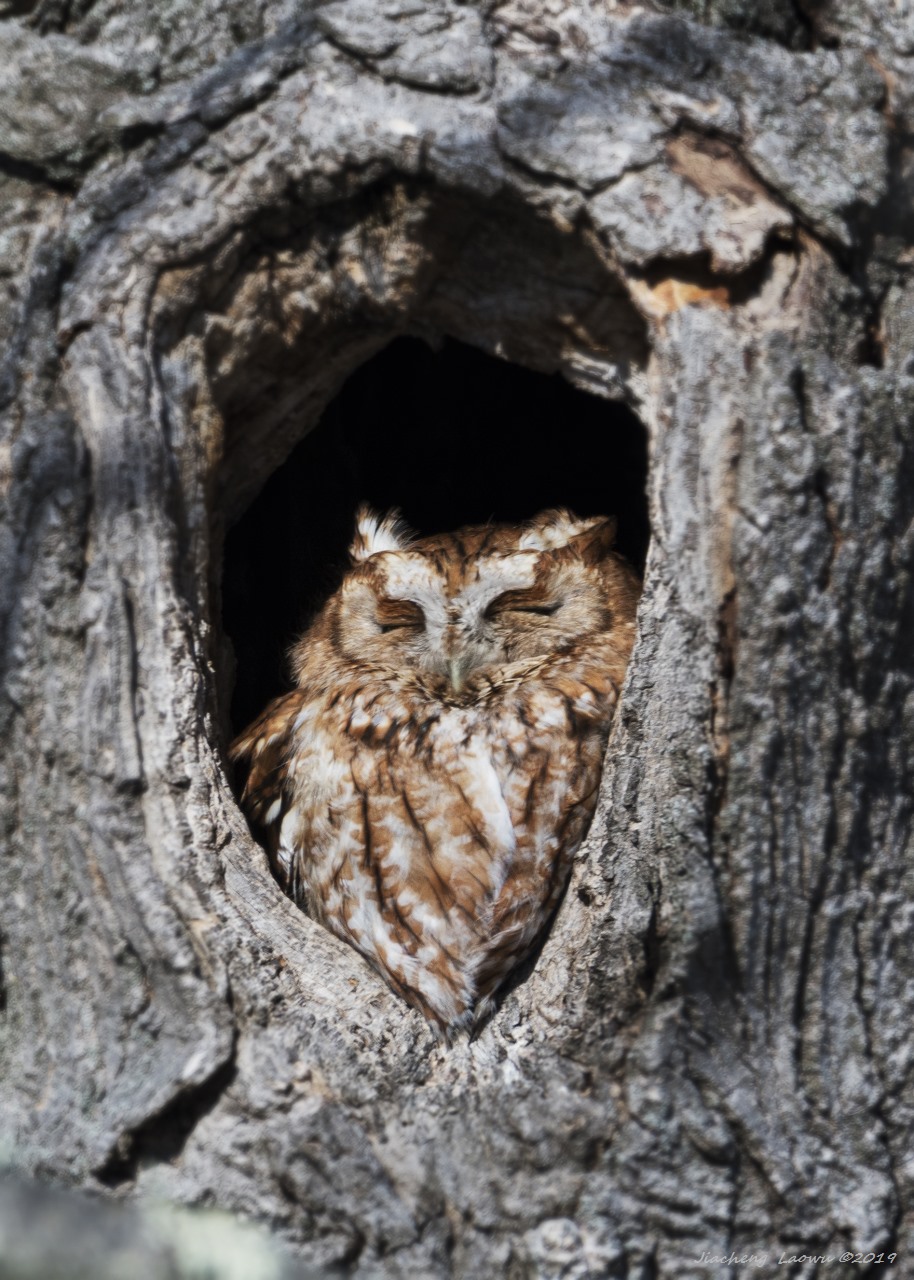